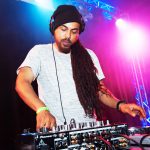 Hailing from the cityscapes of Seattle, recording artist Yungg Trip hit the ground running in 2014 with the release of his debut single “Murdera“, and has since established himself as a prominent multi-genre artist who has no intention of slowing down anytime soon.

Known for his insatiable drive and musical versatility, Yungg Trip’s talent is multifaceted, as demonstrated by his command of a seamless blend of EDM styles, from Future Dancehall and Future Bass to Trap and Moombahton.  No stranger to the worlds of reggae and dancehall, he is already known and respected by many as one-third of Blessed Coast Sound, with whom he has been blazing up dances and festivals and supporting some of the industry’s greats for the past 10 years.

Quickly becoming an in-demand staple among his peers, especially after his debut track “Murdera” was featured on the scorchingly popular BBC Radio 1 show ‘Diplo and Friends’, Yungg Trip continues to receive support from radio and club DJ’s worldwide. His releases have been consistently charting on electronic music platform Beatport, and his production prowess has gained a great deal of attention on both SoundCloud and Spotify. 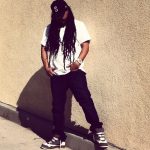 In 2015 he co-founded ‘Flex Up Crew’, both a global collective of music producers and a record label that has proven to be an unstoppable force in the exciting world of Future Dancehall.

Relentlessly creative, Yungg Trip has had a huge year of releases in 2017, including singles “Boom Boom” (feat. Richie Loop), and “Pour Up” (feat. Bobby Hustle and Worm of Bass Odyssey Sound System), as well as the “More Badder Mixtape”, the “Break Barriers EP Vol. 2”, and most recently the “Boom Boom Remix EP”, curated from a slew of entries submitted to a remix competition. All this builds on the momentum of his popular 2016 release “Break Barriers EP Vol. 1”, as well as 2015’s genre-bending singles “Bushmasta” and “Icecream”.

The rising artist has also begun to make his mark in the live performance arena, having performed in every major city on the West Coast of the USA, as well as gracing the stage at major events such as Northern Nights Music Festival in California (Main Stage 2016, River Stage 2017) and at the first “Flex Up LA” party with other Flex Up Crew members Walshy Fire (of Major Lazer), Kalibandulu (Italy), Silva, and Two Sevens Clash among many others. He was also a feature guest artist on Brasil’s Tropkillaz July 2017 visit to the USA.

Currently working on his anticipated release “Break Barriers Vol. 3“, as well as collaborations and remixes with a variety of other artists and producers, Yungg Trip will be taking his formidable sound on the road in 2018, touring with fellow Flex Up Crew members.

MENU | WWW.YUNGGTRIP.COM
We use cookies to ensure that we give you the best experience on our website. If you continue to use this site we will assume that you are happy with it.Ok